CuraGen's founder, Jonathan Rothberg, is among the best hypesters of all time. Just like with Laws of Hype god Elon Musk being compared to Iron Man in modern times, Rothberg's local newspaper in New Haven called him “Rocket Man.” Judging from his resume and long list of patents within molecular biology, any description calling Rothberg something akin to a genius would be an apt one.

“Intel is worth half a trillion dollars because they make great chips. If we make great machines, we’ll do just fine.” - Rothberg in a speech to venture capitalist and i-bankers in 1999. Rothberg understood the importance of utilizing Law of Hype #7 for maximum effect, Compare Apples to Oranges. His biotech firm was in absolutely no way similar to Intel, but he drew the comparison and threw out Intel’s massively inflated valuation to highlight the upside potential.

Slick press kit featuring images of footprints on the moon, flights from the Wright Brothers, were the norm for CuraGen with Rothberg at the helm. In the year 1999, when the valuation was around $1 billion, Morgan Stanley Dean Witter put out a sell side research report that stated CuraGen's intellectual property would carry it’s valuation beyond $14 billion by the year 2010.

Investors easily become over excited about a company’s prospects once the positive news flow gets going, and Rothberg cashed in on the speculative frenzy. Much like Kevin Conroy and other biotech CEOs now, Rothberg got busy padding CuraGen's bank account with several hundred million in equity offerings, securing himself a sizable paycheck for years to come.

Rothberg was a disciplined follower of Law #3 (Stand for an ideal) fond of saying his company was “all about getting sick children out of the hospital.” At the time the company had zero clinical trials underway.

CuraGen did eventually announce a major deal with German based pharma giant, Bayer, in January of 2001. CuraGen and Bayer agreed to develop 80 potential treatments for diabetes and obesity (with the goal of focusing on youth diabetes and getting the fat children out of the hospital, I guess). Bayor did not offer CuraGen hundreds or even tens of millions of dollars as is normal for these sorts of agreements, but rather the two companies agreed to share in the $1.5 billion in associated development costs. CuraGen was to receive a large portion of the royalty stream from any resulting drugs—44% royalty share but also had to pay 44% of the development costs. Shares peaked at $114, coinciding with a $4 billion market cap, in the first quarter of Q1 2000, which marked the height of the Genomics/biotech/tech Bubble. Despite promising technology and a partnership with Bayer, the share price was down about 97% within three years. Eventually CuraGen was bought out by Celldex Therapeutics in October 2009 for a $61.85 million enterprise value. Morgan Stanley Dean Witter was off on their forecasted value  by only 99.56%.

Society has always had hypesters and will need some visionary hypesters to push the boundaries of human progress, or at least talk about it. You must hype in order to raise money and at least give yourself a fighting chance to change the world. Often though some of the best hypesters lack a solid fundamental basis to their business in the long-run and single-handedly help accelerate the mass misallocation of capital into dead-end technologies and industries (see Musk and EVs), or attract so much attention and competition that they ultimately prove to not be the monopolistic winner they've convinced themselves and everyone else they will be. 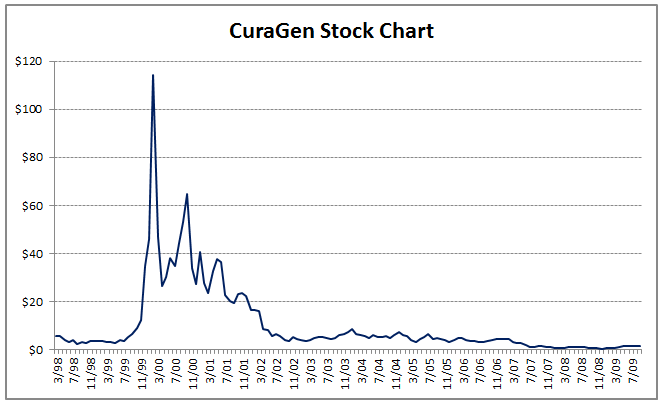